. My unpopular opinion: This show is more wholesome than Spy X Family. Seriously, people aren’t talking about the Yakuza’s Guide to Babysitting enough! With the end of the summer series of new anime releasing shows such as Call of the Night, Parallel World Pharmacy, Vermeil in Gold, Black Summoner, and My Isekai Life, The Yakuza’s Guide to Babysitting has been somewhat overshadowed. 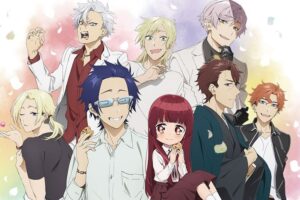 The narrative if centered around the scary Japanese Mafia Boss’ right-hand man Kirishima who is tasked with babysitting the Boss’ daughter and the Boss’ daughter Yaeka. The story follows their interactions with each other and how they start off by barely being able to understand each other. As their story progresses, they go from an awkward relationship to being almost inseparable. They get to know each other so well that they can tell when something is wrong even from the slightest and almost unnoticeable change in the other’s behavior. They face various problems together and separately and as a result, they both grow in character. Yaeka starts off as a somewhat introverted young girl who is afraid to make friends. As her relationship with Kirishima grows, she starts making friends at school and becomes more confident in herself as a result of Kirishima’s support. Kirishima starts off as someone who thinks of himself as only good for doing the dirty work of the Yakuza, but as his relationship with Yaeka grows he learns to become more gentle and less hot-headed as he tries to shield Yaeka from everyday Yakuza business that encroaches on his time with her. Kirishima soon learns that the gang and his boss are really his family as opposed to just a gang of misfits and Yakuza members, and he feels less alone. The side characters complement the two main characters nicely and each has their own unique identity and quirks. As the story progresses, we are reminded that Kirishima is still a hardened Yakuza Gang Member and as a result, a member from another gang is introduced into the story who causes trouble for Kirishima. Unfortunately, Yaeka is pulled into this turmoil, and Kirishima is cast into guilt and self-reflection trying to put together the type of person he is when he is with Yaeka and the person he is as a Yakuza member. Just as we fear we might lose Kirishima forever he is saved by Yaeka and her love for him and Kirihsima once again is reminded of who his family is. This show is just way too cute and wholesome, and you can’t help but smile with that warm feeling inside after every episode. 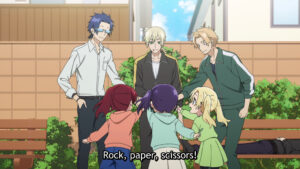 This show packs everything! It isn’t just your simple slice-of-life anime, there are some comedy scenes and action scenes. The show also features some dark scenes with plenty of intense foreshadowing and suspense that are on a whole other spectrum from the cute and wholesome parts of the story. If you’re planning on watching this, be prepared for your heart to be broken and put back together a few times. You’ll be anxiously putting on the next episode to see what happens next and once you reach the end, you’ll be super satisfied and content with the outcome, but it will leave you wanting for more which we will hopefully be able to experience with a season 2. I for one haven’t had enough of Yaeka and Kirishima.