. My Dress-Up Darling, also known as Sono Bisque Doll wa Koi wo Suru, by CloverWorks, is an anime adaptation of a Japanese manga, written and illustrated by Shinichi Fukuda, the series began serialization in Young Gangan on January 19, 2018. The individual chapters are collected and published by Square Enix, with nine tankōbon volumes being released as of March 2022. The anime series spans across 12 episodes of 23 minutes each. This anime series sees two characters of very different personalities come together in the effort of practicing their hobbies. The focal point of the series follows Gojo (an introvert) and Marin (an extrovert) as they find common ground between Marin’s love of cosplay and Gojo’s skill for sewing which stems from his love of making Hina dolls. Together they explore the various facets of cosplay, from both a social point as well as a crafting one and learn how much fun it is to share and explore a common interest with a friend. This allows Marin to follow her passions as a cosplayer and improves Gojo’s Hina doll-making skills. This overlapping of interest unites the two in friendship. While they are two individuals you could never hope to function well together, before long both are flourishing and it becomes difficult to envision the one existing without the other. The narrative allows both characters equal importance and validity and portrays the characters as supplementary towards each other rather than one “coming to the rescue” of the other. As Marin is an outgoing character she helps Gojo discover the world outside of the mental restrictions he’s come up with for himself, she gives him the confidence to explore the world outside of his house and school. At the same time, Marin learns much from Gojo’s earnestness and focus. The fact that Marin never once judges his love for Hina doll making and the way that allows Gojo to open up to social experiences was truly touching. 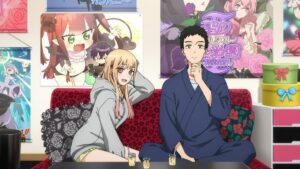 The narrative sees Marin and Gojo face a couple of obstacles as they go on a series of grounded, slice-of-life-style adventures learning about cosplay, meeting new friends, and growing in confidence. The series features some comedy moments that will have you in stitches all the while delivering loveable characters and a heart-warming experience.