. Himouto! Umaru-chan is an anime series by Doga Kobo and is based off the Japanese manga series written and illustrated by Sankaku Head. It began serialization in Shueisha’s seinen manga magazine Weekly Young Jump on March 14, 2013. It has been collected in twelve tankōbon volumes. An alternative version was serialized for two chapters in Shueisha’s monthly magazine Miracle Jump in 2012. The anime series consists of 12 episodes of 24 minutes each. This must be one of my favorite “slice of life” anime as the main character is just soooooo relatable and her older brother is just soooooo loveable! The narrative follows a high school girl, Umaru, who appears to be the definition of perfect with her stunning good looks, exceptional grades, and multiple talents in public. But as soon as she returns home, where she lives with her older brother, Taihei, in an instant, Umaru reverts into a lazy, messy, lay about who depends on her brother for almost everything. 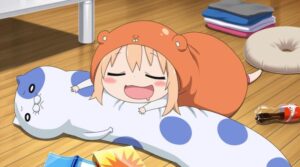 Despite her somewhat selfish and secluded lifestyle Umaru still has a couple of close friends who she interacts with. Taihei does most of the housework due to Umaru’s lazy nature, he is well aware of all her bad habits and personality but rarely complains when she inconveniences him, he does however constantly try to lecture and reform Umaru but his attempts aren’t very successful.

The entire anime is filled with Umaru’s various personalities and we watch as she deals with daily life through each one. Watching Umaru turn into a lazy monster at home who does nothing but play video games, eat junk, and be a spoiled little brat can be entertaining although you do end up feeling some sympathy for Taihei, yet on the other hand, you end up thinking to yourself that he allows her behavior. 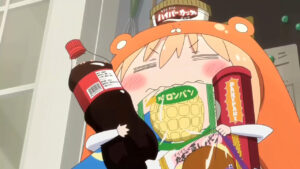 The dynamic between Taihei and Umaru is one of the aspects of the anime which gives it its charm. Despite being a spoilt brat at home, Umaru does have some decent character traits, which earn her some good friends. The struggle to maintain her secret as a layabout from her friends becomes another aspect of the anime that is weirdly entertaining and at some point, it feels like her friends know her secret but accept her as she is because they’re friends? Honestly, this dynamic is difficult because her friends somehow think her school self is one person and her home self is someone else (Umaru has fooled them into thinking her home self is her school self’s younger sister)???? I struggled to understand how they did not realize that they were the same person, which is just a bit of a discrepancy considering the narrative.

Seeing her antics, as well as the troubles the other characters get involved with, will be enjoyable for some viewers. The main concept is about cute girls doing cute things with references to other series or Japanese games being thrown in from time to time. As a result, this sort of show will certainly draw in certain fans while proving to be less attractive to others. 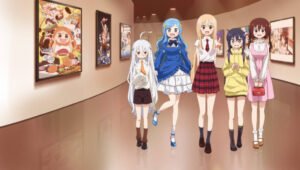 In short, this series is effectively a story about a girl who acts like a straight-A student while secretly being an unkempt gamer and anime fan at home (Otako), and about her attempts to keep her friends from realizing that she’s a slob.